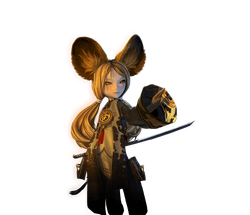 The Lyn have also taken up the sword, but rather than wholly adopt the techniques of the Blade Master, they have invented their own unique blend of skills exclusive to their kind. The Blade Dancer merges rapid attack speed, high mobility, and devestating control abilities at the expense of defense.

Blade Dancers focus on dashing around the battlefield at blinding speed to evade damage entirely. With both physical and mystical abilities at their disposal, they can dominate a fight before their opponent even realizes what hit them.

The Blade Dancer’s high attack speed and ability to chain attacks make them excel at one-on-one battles, while their crowd control skills give them an undeniable edge in parties. However, the Blade Dancer must always be aware of their Focus and pace themselves lest they risk running out of steam and leave themselves open to counter-attack.

Community content is available under CC-BY-SA unless otherwise noted.
Advertisement